The TEC Bridge, 40-year-old structure which is used by two million people annually, links the south-facing Eaton Centre to the north-facing Hudson’s Bay building over Queen St. W. two of the city’s biggest shopping and office complexes. In early 2017 Cadillac Fairview unveiled plans for a new pedestrian bridge to replace the existing structure.

For the new bridge above the Queen Street doors, a combination of glass and etched bronze cladding will cover the exterior, which has been designed to create a contextual link between the differing architectural typologies of the two connected buildings.

To the north, the bridge uses a modern, rectilinear geometry, primarily clad in light, airy glass panels with narrow bands of etched bronze. To the south, the bridge’s glass coverage decreases, with the bronze etched panels taking over as the primary cladding material in reference to the heritage stone exterior of the Hudson’s Bay/Saks Fifth Avenue building. Here, the bridge takes on a more circular geometry, bringing customers into the building through what was originally an arched window. 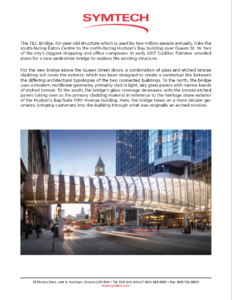